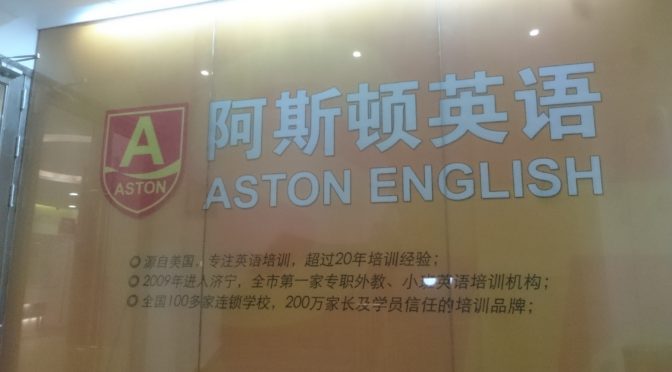 Aston English is a very long established English training centre for TEFL teachers that I had found through the well received and popular Noon Elite Recruitment agency. The branch I was at was in the northern Shandong province where there was a city called Jining.

In terms of the location I couldn’t have been in a more comfortable place to assimilate, as this medium sized not to well known city is viewed by fellow foreigners to be extra friendly. Long time foreigners have also been to many other places around China but have always been drawn back to this city as it feels like ‘home’.

In terms of my experience over here from the very beginning, I have been exchanging useful pre-arrival emails about how to get to Jining from Beijing. I was picked up from the station at the nearby historic Qufu and given an introduction meal to then not get given my flat immediately but after a few days while I was temporarily staying in a provided hotel.

I was introduced to the team and with this branch there are quite a few foreign teachers who vary in levels of experience with a good blend of established to new and the training was as and when it had been decided after a few days of self integration of the surroundings.

The training was mainly given on the foreign teacher’s days off by the manager and various ways of testing on lesson planning and class handling that was given out. Our office space was fairly small although our team was very pleasant with a sizeable amount of Chinese teachers. The toilets were in a Chinese style so although this maybe changing eventually.

With teaching hours each week being 23 hours roughly and having three days off it was a good deal and there was even Chinese lessons included as well with 4 hours per week which is extremely helpful especially in a country such as this you’ll find out! The faculties of the classrooms and buildings are great with interactive whiteboards and a decent sized classroom.

One of the major plus sides is that the accommodation is small stones throw away and by walking only takes less than 10 minutes to get to the school and has an self contained en suite. The location is very central in Jining’s main city centre and has a McDonalds, Burger King and a KFC close by if your missing home comforts. But also close by if your looking for authentic experiences is a very local market as well and even a very oriental park with a lake within walking distance. There is also a main Hospital and a large selection of pharmacies around as well in case you end up falling ill, which happens while new and getting used to the cuisine, such as in my first few weeks.

Overall I would say it has been a majority positive experience with a dedicated team and a good amount of teachers both Chinese and foreign with great students willing to learn, of course every place has its mishaps such as a flooded bathroom but these were dealt with swiftly from the company. Being situated between Beijing and Shanghai it is possible to have short trips to neighbouring sites worth visiting such as the traditional water town of Taizerzhuang and also close to one of China’s five sacred mountains being Mount Tai.