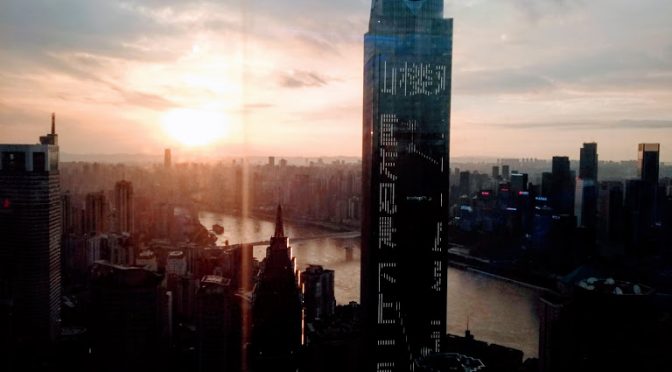 ‘Good morning Miss Clark, here’s your welcome pack and your school will be picking you up this afternoon.’ I had just arrived in on a flight to Beijing for TEFL training. Panic and anxiety flooded into my system, it began to sink in that I was going to be an actual teacher whether I was ready or not!

Applying to be an English Teacher in China

I applied to go to China through the British Council and in 2018 I managed to secure a place. The process of getting a Z visa is notoriously difficult and requires a lot of jumping through hoops and red stamps. Luckily, the HR officer for my school in Chongqing made sure that guiding me through the hoops was idiot proof. After months of meandering through legalisation, notarisation and interview obstacles, all I had to do was wait for that magical key to appear in my passport. Top tip, don’t book a flight before you physically have your passport as it took me two booking attempts before I had both my passport and flight ticket at the same time.

Before going to my placement school in Chongqing, me and the rest of the British Council English teachers went to Beijing to complete TEFL training. I definitely wasn’t prepared for the intensity of the work that week. But, fuelled by coffee, anxiety, a little food and the promise it was only 9 days, we were all able to graduate from training. It was truly a bonding experience and I met a lot of good people in those 9 days, some of whom I visited in the coming months. Finally, It was time to hop on a 12 hour fast train and head to Chongqing. There were 4 of us going to Chongqing, 3 of us residing in the city and the other person somewhere outside of the main city, unfortunately he seemed to just disappear (although his Wechat moments showed he definitely was alive so we weren’t that worried).

My school was Depu Foreign Language School and it was in Ba’nan district, a district far away from the center of Chongqing (Yuzhong district), also known as the land of the mermaids (apparently the aquarium nearby houses a few). I remember the first week being a blur of bureaucracy, medical checkups with genital glances and bad photos expertly photoshopped to make me look less like a sleep deprived mess. My HR officer helped me with settling in and sorting out things to do with my flat which would probably be the nicest flat I would ever have the chance to live in (it was free).

The school itself consisted of a large primary, junior high and high school with most of the students boarding during the week. I worked in the Bilingual Junior High English department of Depu alongside my colleagues (now friends). My team in the English Department were a pleasure to work with and I learned a lot from them throughout the year, we also sometimes went out for lunch together which was fun. I had 18, 40 minute classes per week and my contracted hours were Monday to Friday 8.30am-4.30pm. I was responsible for 3 20-25 student classes of Listening and Speaking for IG1 (grade 7), two of these classes I also had General Studies with. I also took two of the classes in IG3 (grade 9) with 12-17 students. Unlike a lot of other teachers from the British Council, in DEPU, you are very involved in teaching and reporting about the students. The English department was also very active in organizing after school English events such as English Corner every Monday and other things like speech and spelling competitions throughout the year.

Admin was the one thing that took up a lot of my time as a new teacher. Planning for the classes you were going to give, uploading your future lesson plans and reviewed lesson plans to the school’s database and preparing monthly detailed reports for every student took a while to adapt to. I had to ask a lot of questions and get help from my colleagues to be able to do it. The year was a very busy one and I found it difficult to keep to my contracted hours, often staying a lot later than this. However, this is common in most parts of China. My Chinese colleagues were constantly working and as homeroom teachers they were responsible for up to 25 students and the demands of their parents. So to say everyone was a little busy is a big understatement. But in general, I  think being a new teacher in a school is challenging and regardless, it certainly did get easier towards the end. If you want to be an ESL teacher in China and want to be involved with your school and have the time to build up relationships with the students and teachers, I would recommend it.

The Pros of Working for a Private Foreign Language School

One of the highlights of working for a private school was the students, a lot of them were lovely. It was very rewarding to see their progress throughout the year and witness their day to day lives. As most of them boarded at the school, you saw them all hours of the day. Another big help with the ups and downs of living in China was working with other people who were going through the same experience I was. We could complain, laugh and support each other when things got tough. There were definitely times in lesson breaks when I needed a hug and a diame bar and my office was the place for this. Since the school is a Foreign Language school, there were a lot of people from lots of different places around the world and most of the staff can speak English well so you don’t feel very isolated as a foreigner.

Also, as a foreign teacher in China you usually get free accommodation or subsidised accommodation. The HR were also understanding when my boyfriend came to live in my flat with me from the UK which was great. One of the major pluses of working at a school is the holidays. You get long paid holidays off in winter and summer and some other random weeks here and there which allows you time to travel. This is one of those things that makes working in China after graduation a great opportunity.

Chongqing as a Place To Live

As a city, Chongqing still retains an air of mystery, it’s one of the 4 municipalities in China but mention it to most people and they don’t know where it is! Although still undeniably Chinese in culture, Chongqing is big enough that you can find international food and shops if you want it and the prices here are a lot cheaper than Beijing or Shanghai. It’s also a very safe city to walk around as well as being very well connected via high speed train or airplane to the rest of China. In terms of nature, there are some beautiful mountains in and around Chongqing and it’s famous for hot springs which are great in the winter. I practically lived at a hot spring in winter as there is no central heating in Chongqing. Thermals are a must!

However, there are some drawbacks to living in Chongqing. The heat and humidity in the summer are pretty hard to get used to. Think intense back sweat and frizzy hair as constant accessories to any outfit. One major thing about Depu was the distance it was from everything which made it difficult to travel and explore at the weekends. However, Chongqing is massive so getting anywhere requires endless patience and podcasts regardless of the journey. Since Chongqing isn’t that well known as a city there aren’t that many foreigners living here considering its size, so getting stared at is quite common and not being able to speak Chinese makes it tougher to access the food and culture here. I would recommend getting Chinese lessons whilst in China as it allows you to access more things and make the most of your time here.

Overall, I believe Chongqing is an interesting place to live and I would recommend it. As for my school, it allowed you to build strong relationships with the staff and the students and it gives you good holidays. However, it should be noted that it is aspiring to be the best of the best as a Foreign Language School and as a new teacher I felt a lot of pressure to work towards this goal.