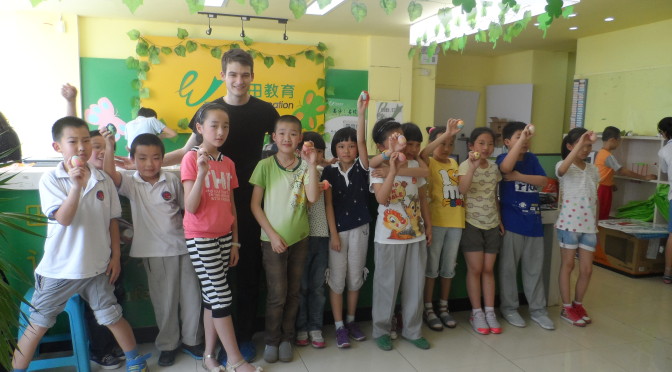 I work for a school called Tian Tian Elite education （田田教育） a private school company employing approximately 200 hundred Chinese teachers and an additional 8 foreign teachers and accommodates an estimated 20,000 students in numerous branch schools dotted around the city and further out in Guizhou province.

The school is friendly and has excellent staff and a competitive salary.  Originally, I was down to go anywhere in China except the busy big cities of Beijing and Shanghai and I chose TT in Guiyang for the relatively higher salary compared to other schools. It wasn’t until I started working in Guiyang and mixed with the other foreigners in different schools that I realised how lucky I was. Other schools in the area were only paying half the salary as I got and the teachers had to share houses. In comparison, I have my own 2 bedroom large apartment in the city centre all to myself. Yes, I was lucky for choosing TT.

My life as a TT Foreign English teacher is pretty interesting, I work at 5 different branch schools, three of which are walking distance from my house and two of which are further afield on the city outskirts. I work a 25 hour week in the evenings from Wednesday to Friday then all day Saturday and Sunday. As the school is a private school, they work in opposition to the running times of the public schools, in other words, as soon as the student’s finish school, they are then able to go to private schools, usually to either learn a musical instrument or to learn a foreign language. TT school is one of two huge school companies in Guiyang city that provides lessons in both English and mathematics to help further a child’s academic aspirations.

The 5 schools I work in all follow a similar layout, they are either independent buildings on the street or floors in high rise units in the city centre. The schools have numerous classrooms, a reception, a teacher’s office and a T.A’s office. The school colour scheme follows a colourful yellow and green that matches the school logo. Classrooms are fairly large and usually very well equipped. They all have a large whiteboard and almost all classrooms have a flat screen T.V with USB to play multimedia content such as photographs, songs and movies. Furthermore, schools that don’t have T.V’s in all rooms have specific multimedia rooms with large projectors.

The school is pretty well supplied with an abundance of white board markers, erasers, pens, crayons etc and a big pleasing factor for me is that I am given pretty much free reign with all the equipment and allowed to photocopy, use marker pens etc as much as I want without question. This makes my life a lot easier.

Class sizes, in total I teach approximately 20 to 23 classes per week that range from 40 minutes for younger students to 1 hour classes. The average class size is around 20 students and so in total I teach around 400 children from age 4 to 14. Classes are aimed to be fun and creative as the poor kids have already done a full shift at public school. My job as a foreign teacher is to focus on the speaking element of teaching and to use whatever interesting topics we can think of to stimulate the students desire to learn English words. For example, last week I taught Easter and took students on an Easter egg hunt and sang a song. For the older kids I had them read peter rabbit and act the story out, tell me the moral of the story etc (afterwards let them go on an egg hunt too). In my opinion, I think that the key skill to being a good foreign teacher is to be creative and flexible. Kids could learn English from a book or writing and speaking boring drills, but it won’t work because they won’t want to do it- it’s boring, the key to being a good teacher is making them learn it easily without them having to work.

My school is very friendly, almost all the teachers and T.A’s in the company are extremely friendly and almost all speak sufficient English to have a basic conversation.  The other foreign teachers are luckily mainly of a similar age to me with currently 3 American teachers aged 22 to 24, an over patriotic Canadian aged 30, a 29 year old New Zealand lad and a 26 year old Scottish Chinese gentleman and a 42 year old from Manchester, U.K. The team is great and combined with our friendly boss we have had endless great nights out, weekend breaks around China and the social life is excellent.