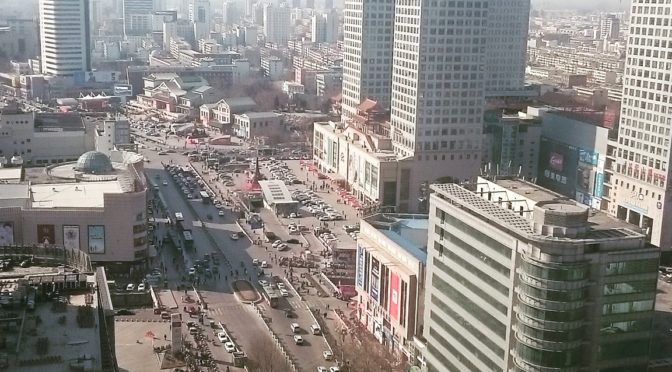 In a follow up from my first blog, I had woken up the next day in Beijing, and had to think where I was for a short moment. The realisation then dawned upon me that I was not in fact at home, blanketed by central heating, but in the colder hostel room in China.

For breakfast, I thought to stick to comfort in familiarity with an egg omelette as part of me acclimatising my stomach of sorts, to avoid having any repeat of an incident similar to previous travels in Tanzania or India…always learn from experience it seems.

The local staff in the hostel looked slightly lost and fairly bored at this time of morning, as there weren’t too many guests. This resulted in one staff member popping bubble wrap, while staring ahead distantly.

I was re-arranging my suitcase in the hallway before leaving, due to squashing random items in random areas of my baggage, with reason being that I was slightly over the limit at the airport, the downside was that a flight of stairs prevented me from doing this in my room earlier to save the hassle!

It was only a brief ticket collection trip yesterday when I had arrived. I then braved the Beijing subway system in order to collect the ticket to Qufu, before heading to Jining via a pickup. What did surprise me the most, was the heavy airport style security in place for just using the equivalent of, for example, the London Underground. I was heading toward to the Beijing south railway station and the only thing that came in handy was my mandarin pocket guide, to ask for confirmation that I was heading on the correct line. Once I reached the railway station and past it’s multiple, freshly squeezed orange juice vending machines that we can only dream of in the UK, I waited in some form of line to ask for tickets to use the ‘CRN’ high speed rail. After a few mispronunciation corrections from the ticket officer, I had to show my passport being the foreigner that I am, he then handed me the ticket with an error on my first initial knowing full well this could hugely impact my entry later on. I waited once again in the line and asked for it be corrected using a great deal of pointing.

So, fast-forward to the hostel the next day, I had the ticket and I was all set to go but finding a taxi was an ordeal that eventually gathered a small crowd of Chinese locals looking to help me explain where I was going to a driver. Whilst this took about 10 minutes, I did not want to be late for the train and had no choice but to accept the non-registered looking taxi (knowing full well I had been ripped off as he put my luggage in the boot of the VW Passat, with a non-metered set fare of 120 RMB).

Throughout the Beijing traffic and what felt like an eternity, I had reached the railway station which also had an airport style security check and then looked for the platform to get the Beijing-Shanghai line. Boy was it busy. A large crowd of commuters and families were huddled from the entrance to the opposite end, which had not opened yet, and I was expecting a giant rush once given the green light. Anti-climatically, I was surprised to see a more ordered walk towards the platform where I most definitely delayed people behind me, as I had my passport checked once more.

The seemingly endless length of the high speed train, ended up with me going on a nice long hike through the cabins, which were admittedly very clean, comfortable and spacious, with a steward at each carriage entrance.

I had sat down and the quiet sound of the engines was gliding the train away from Beijing and allowing me to soak in some very flat, rural and icy countryside. A curious passenger had joined at one of the stops looking to converse and with my Mandarin guidebook, I had figured out he was heading to Jining via Qufu where we reached Qufu and he wanted me to follow him to get to the exit- of course we reached the exit but the hardest part was telling him I had to wait for a pick-up and not go to take the bus.

Fortunately, this confusing situation was interrupted by a school representative from my employer who explained in mandarin what was happening. I guess this is another start to a more longer journey!