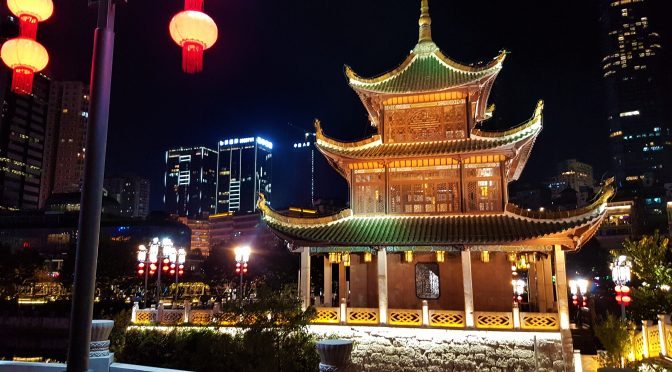 Guiyang is your typical Chinese city that you’ve probably never heard of. Surrounded on all sides by dramatic mountain scenery and lush bamboo rainforest, it offers a sense of adventure and difference from our sheltered western world. The city is the capital of China’s poorest province, and though they may not lead the nation by many a metric, they are the undisputed leaders of alcohol production and the locals have a very ‘vibrant’ nightlife.

I first arrived in this city fresh off the plane at a bright eyed 22 year old TEFL teacher in November 2012 over seven years ago. Returning in November 2019 as I watched the streets go by from the window of my airport coach, the memories of this dear place came flooding back. This is your typical 20 something TEFL teachers experience of how the city has changed and how its spirit has never really left me.

Back in November 2012, everything about Guiyang was new and exciting to me. It was on the cusp of total transformation and even as an outsider it was apparent that change was everywhere. I remember the city feeling very Chinese. I lived in the city centre on the 4th floor of an old concrete apartment with terrible fire safety and a moderate infestation of rats. Across the road from my flat was a supermarket and to my surprise, a KFC.

This was the time when western brands and restaurants were tentatively opening up in this distant metropolis and it was fascinating to see. Later in my first year, a shopping mall a short walk from my apartment opened the cities first Starbucks. The cafe was huge and extremely popular, despite charging the same for a tall late that would easily buy 3 meals in a fried rice restaurant! Later the following year came the first Baskin Robbins, exclusive asian restaurant chains and even a western style micro brewery touting draught beers and ‘Fish & Chips’.

Back then in 2012 I remember bragging  that the city that I now herald as ‘my’ home Chinese city didn’t have a Mcdonalds. I was immensely proud of this. On my return to the city 7 years later I booked a room in a hotel in the city centre and took a stroll down the main road. A few minutes along my literal walk down memory lane, it was expected, but no less repugnant to be embraced by the all too familiar glow of those golden arches. A prominent new franchise on a busy intersection. I’m sure they will earn a fortune here. But I didn’t come half the way around the world to remote Guiyang for gastronomical ubiquity. Oh well, I’m grateful to have lived here before Big Mac boxes littered the streets.

Although China may be developing at an unprecedented rate on a national scale, I was endeared to see that my old apartment complex remained unchanged. The apartment was not aesthetically pleasing to say the least, and the surroundings were very, well, ‘second-world’. I remember my mother and her partner Bob coming to visit and me walking them down the road to it at night after a red eye flight from Beijing. There were literally kids defecating in the dim, damp street as we walked. “Do you think this is funny!?” my mum hissed, clearly disapproving of my choice of abode . Yeh, I did kinda.

Seeing it now the differences I noticed was the sheer increase in cars. Back in 2012 cars were a new novelty for the average household and although common place for business use were still an uncommon luxury for working class families. The  second hand car market was still non- existent and cars were only bought brand new. I expect the increase in domestic car production and growth of wages is the cause of all these new motors, and, although hypocritical as a car owner to wince. I can’t help but think about the devastation this will have on the planet. Earlier on my China trip in Changzhou, I overheard a teenage Chinese couple talking about their future aspirations. To my sorrow they were obsessing over earning enough money to ‘make it’ and buy a trendy new status symbol. You may recognise this products Chinese name; it’s simply called an ‘SUV’. Yeh, another one or 100 million of those. Just the thought of every young chinese couple buying one of those gas guzzlers horrifies me to the core. Can we launch a marketing campaign or something to change their aspirations to road bikes or electric busses? Maybe we could ask Mcdonalds, they seem pretty adept at selling their ideas here.

Like so many 20-something gap year travellers, my excuse to work in China was Teaching English as a Foreign Language or ‘TEFL’ for short . My school, Tian Tian English, that was so prominent in 2012 had now long since sold out to a huge Chinese corporate chain in Beijing. The owners had, quite literally, took the money and ran off to Canada. Literally abandoning their loyal staff to take their chances with the big brass. One of those was my boss Shane and his assistant Echo. Two hard working individuals that took care of me and another dozen or so teachers back in 2012. Fast forward now, the school has no western teachers anymore and they were thrown under the bus for a pretty penny. You’ve gotta love capitalism!

During my time working in Guiyang my dinners almost entirely consisted of meals in a handful of nearby local restaurants. These were small shops usually with up to a half-dozen tables that specialised in a very specific dish. For example, one shop served beef noodles. You could order extra beef, or even an fried egg on top, or extra noodles. But whatever way you spun it, you were eating beef noodles.

A personal favourite restaurant of mine was the Sha guo fan or ‘sand bowl rice’ restaurant on Shengfu road。 This was a small family run restaurant just outside one of my school campuses where I often worked evenings. The boss there was a friendly man that made a delicious bowl of rice casserole. When I couldn’t speak any Mandarin, nor read any characters on the very basic menu, he was always understanding and happy to prepare meals for me. Intuitively, he knew what I wanted to order. At first I thought he was psychic, then I remembered, this restaurant only serves one meal!

The owner was helpful in slowly introducing me to more basic Mandarin phrases. Returning 7 years later I was delighted by what I seen. Although the price has changed from 10 yuan to now 12 yuan (approximately $1.70 or £1.36), the shop and owner is still there with his wife and son. 7 years later my Mandarin is now rather decent and there was no one that I have been prouder to have a long chat with and show my progress than the bos at Sha guo fan.

Back in 2012. Guiyang taxis were king. As soon as you arrived at the airport, they had you. Those endless swarm of green battered cabs ruled the roads, and they deserved it. Cabs in Guiyang were cheap, quick and reliable. A forty minute ride from the airport to the city centre cost only 50 Yuan, about £5 at the time. If that was too expensive for inter city travel and you fancied testing your Chinese bus schedule skills you could try out one of the many bus services costing one or two yuan per ride (2 yuan for air-con busses, 1 yuan without).  Getting around Guiyang was never difficult and it was always a reassurance to know that if you ever got lost, a simple wave of the arm would hail you a cab and get you an affordable lift back home.

Throw yourself into today and there is now a brand new metro open and running in the city. The first line is already operational with additional lines under construction. The metros in China are an absolute marvel and testament to the great work the country has done in recent years to truly make quality transportation accessible to all. I tested the new metro on my way back from a reunion with friends, I alighted at the stop for the city centre, a centre I knew very well and still got lost. Luckily Guiyang is a friendly city full of kind and welcoming strangers and when I asked a fellow typsy young lad at a road crossing he insisted on walking me back to the main street.

An incredible example of this is my trip to the ‘future ark’; a new residential development district some half an hours drive from the city centre. I had gone to meet a client school in my capacity as a TEFL recruitment agent and after hearing good things I wanted to see the school for myself. Upon my return to the city centre, I did the usual and hailed a cab.

The driver was a friendly 29 year old local chap originally from the north of the province. He was married and in the city for work. More importantly he was eager to talk with me about my impression of Guiyang and what I was doing here. Thanks to the approaching rush hour the journey back was a little longer than anticipated and by the time we got to my hotel 40 minutes had accumulated on the meters toll. As I got my wallet out to pay for my journey and wish him well, he told me that the cab fare was free, that it was his pleasure to make a foreign friend.

Even more amazing, during our conversation, I told him my father Gary, a proud farmer, was fascinated by traditional Chinese farming practice and he wanted one day to see one of the few remaining oxen ploughing the fields before increasingly affordable Chinese tractors finally made them redundant. A while after our encounter, the drivers friend contacted me on Wechat (Chinese whatsapp) and sent me a video they took specially of their impressive beast on the farm. Below are those very videos and I think the Ox is amazing.

It was in Guiyang where I created this very China blog chinatefler.com now filled with stories from teachers the world over. Since my return from my almost 2 year placement in Guiyang in 2014 I created my own China TEFL recruitment agency which, up to the coronavirus pandemic has grown to be one of the most reputable and well known China TEFL placement agencies of today.

It is hilarious that just as things have started to take off and we have made a name for ourselves and this site that covid hit. But then again, if you’re not comfortable with riding out uncertainties then starting your own business isn’t for you in the first place!

Nobody knows what the future holds, but I’m confident that positions will one day reopen and these positions will continue to blossom. I never thought I’d be living in China, now I’ve been touched by Guiyang its completely changed my life for the better and blessed me with an experience I have no doubt will be longed for by countless other westerners eager to see the eastern perspective and experience adventure and opportunity in my opinion, unparalleled anywhere else on on earth. Guiyang left a mark on me far more profound than I ever could imagined and I embrace the cities future and the stories of far more westerners to come. To Guiyang. In my opinion the best city to gap year in the world.