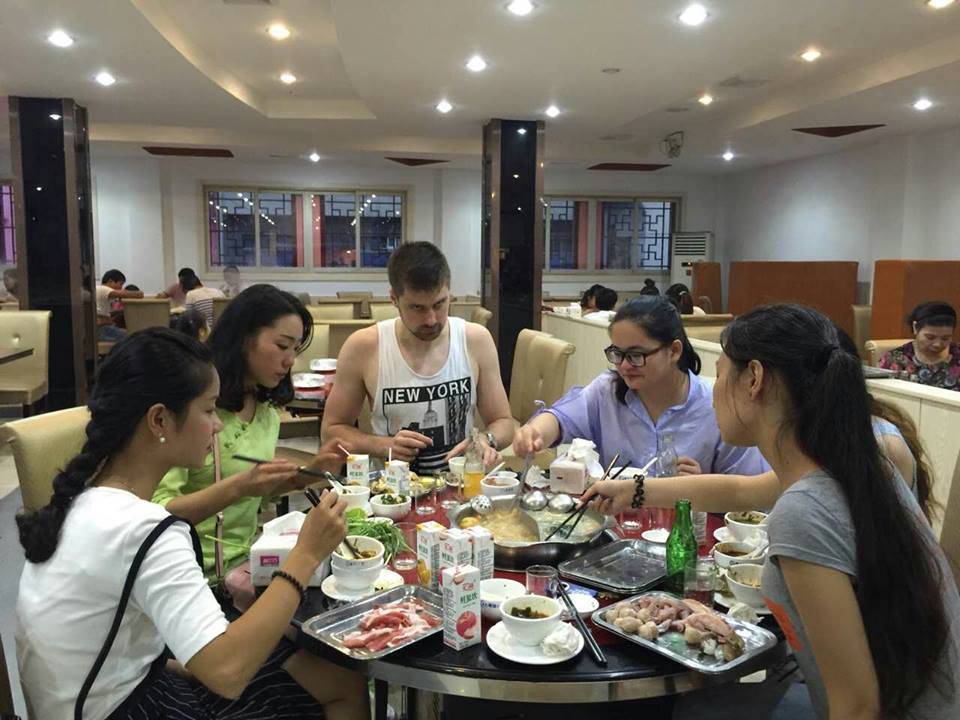 It feels like a long time ago now, the lengthy flight from London Heathrow to Hangzhou, that included a two hour bus journey  from my place to the airport and a four hour stop-off in Hong Kong. By the time I arrived at the hotel Echo English had arranged for me, I’d pushed through the tiredness barrier and barely felt anything anymore.

My first impressions of Hangzhou were reasonably positive; I’d been told many horror stories about China’s pollution and it’s chain-smoking population, but Hangzhou was far cleaner than that. There were a lot of trees lining the streets, no stray dogs wandering around and less smokers than in Britain! I got a number of strange looks from Chinese people and the odd photo request, but that was about it. I think there are quite a lot of expats in Hangzhou so the white guy novelty had worn off for the locals.

Upon my arrival at Echo, me and one of their employees went to get something to eat from a place across the street and I was immediately given a dish that you wouldn’t find anywhere in Britain; chicken FEET in a hot sauce and rice. There’s a lot of bones and tendons in those things. I was too famished to care and crunched my way through them, barely pausing to swallow. Bon Appetit.
Over the weekend, myself and the other foreign teachers would be introduced to many local delicacies and new ways of dining. Being a closet fatty, this was easily my favourite part of the weekend and there wasn’t anything that I can remember disliking (one exception; some incredibly spicy dish with a heat comparable to the napalm they used in Vietnam). The rest of the time, we spent our time observing other foreign teachers take their classes (they made it look unbelievably easy) and sightseeing. If you ever get the chance, the West Lake in Hangzhou is a sight to behold.

One thing I will say for Echo as an organisation; they play their cards close to their chest. During the first few days of my stay in China and the 6 months prior to this that I was in contact with them, they failed to mention that I wouldn’t be teaching in Hangzhou like they implied but instead in a ‘small town’ near Taizhou (which is a huge province). When I asked for more information, they simply didn’t know anything. The only thing they did know, was that I’d be the only foreign teacher in the school. Cheers for that.

After a comfortable 2 hour bus ride to the ‘small town’ of Tiantai (which in reality, is probably the size of Sheffield) I was made to feel very welcome by the local Chinese teachers and shown to my new apartment. It turns out that this place is a stone’s throw away from the school whereI’d be teaching. Literally, a stone’s throw. I reckon I could make it from my apartment door to the school gates in under 60 seconds. As I rode the elevator up to the floor where my new accommodation was, I’ll admit I was slightly apprehensive. What if it was a crap hole? I’d no doubt soldier through and put up with it but it would certainly put a damper on the 10 months I was to spend there. As it turns out, I had nothing to fear – it was actually pretty good! I reckon it would fetch a price north of a couple of grand a month if it were located in London. There was however, a clear logistical fuckup on the part of the architect. I’ll let you peruse the photos below to find it. I’ve no doubt you’ll crack up laughing when you see it – particularly if you’ve met me before and therefore know how tall I am! 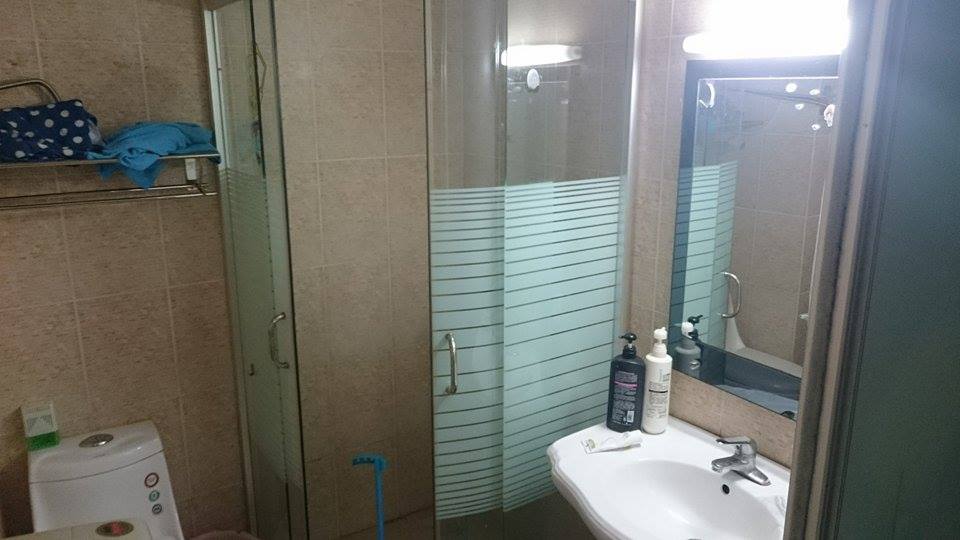 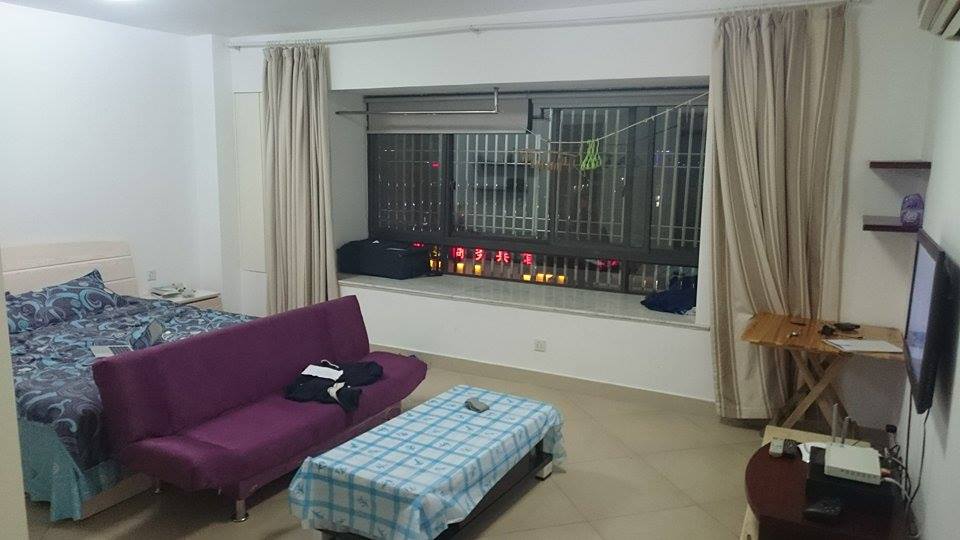 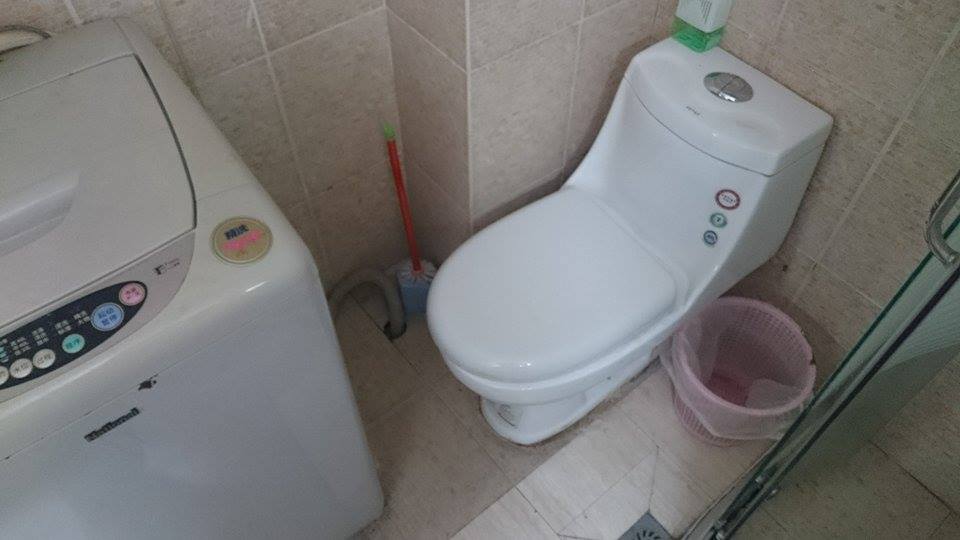 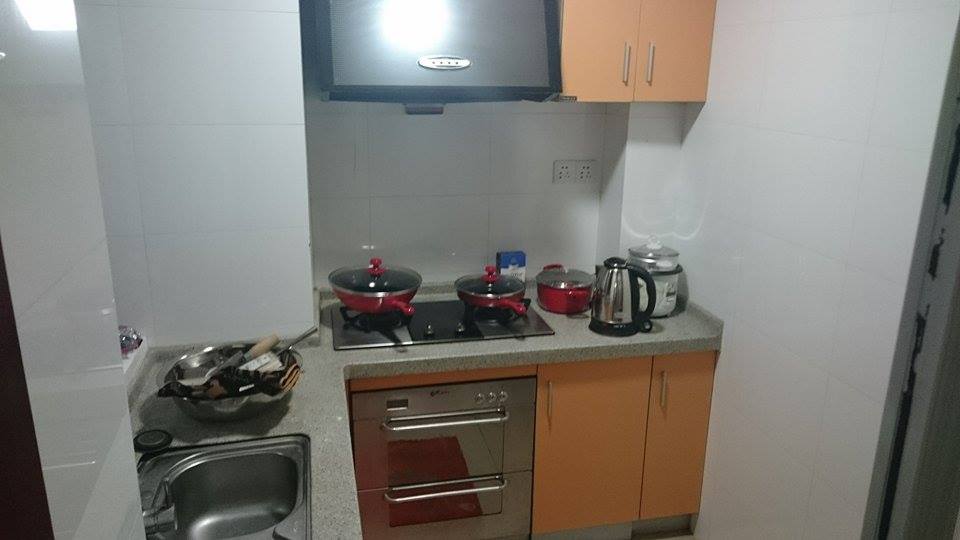 I’ll say this for the other Chinese teachers at the school; they were some of the nicest people I’ve ever met. They went above and beyond what was asked of them to make sure I settled in as smoothly as possible. This helped me a lot, as I was sharing an office with roughly 20 of them, they were all female, in their late twenties and a few of them had kids. So you might say I was badly outnumbered. They took me to more nice places to eat and showed me the Buddhist temple in Guoqing, as pictured below. In return, I taught them some very important Western concepts and ways of life. Examples include ‘resting bitch face’, skinny-dipping, ‘cheeky Nando’s’ and the crucially important ideology of going into McDonalds or Starbucks for a dump without buying anything. I stopped short of teaching them sarcasm though. They’re not quite ready for that yet. 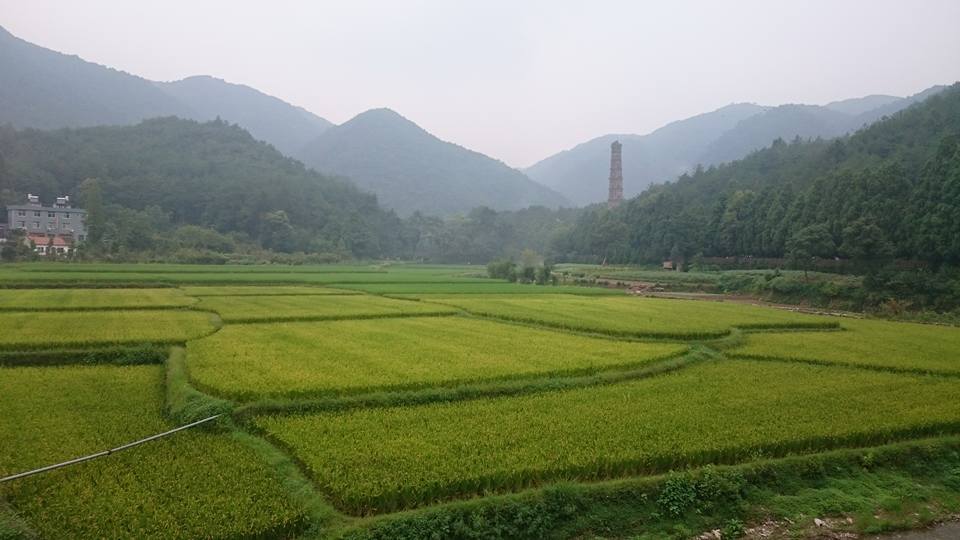 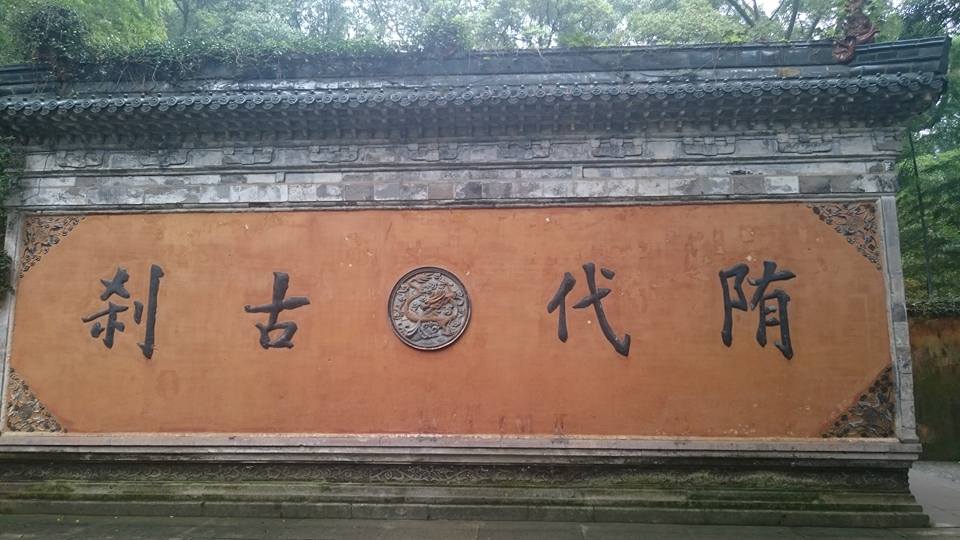 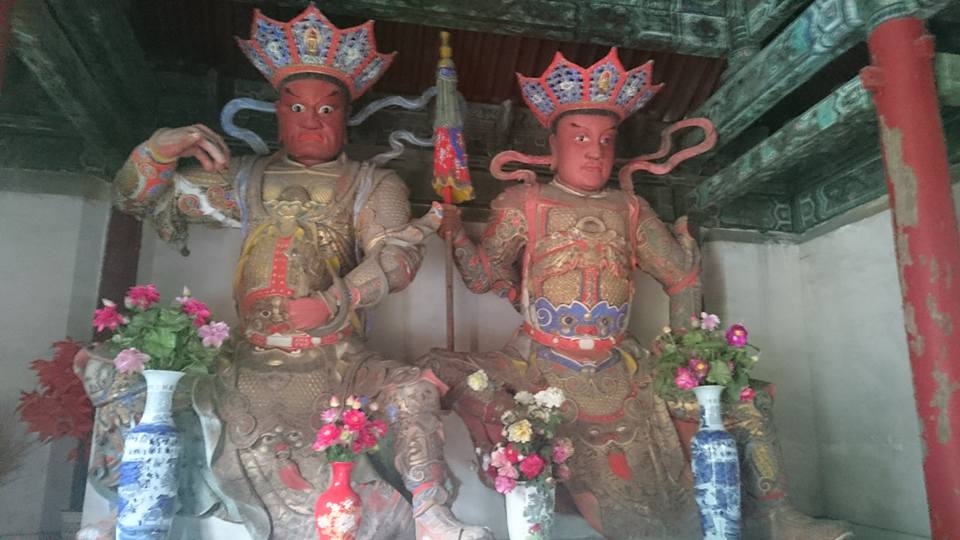 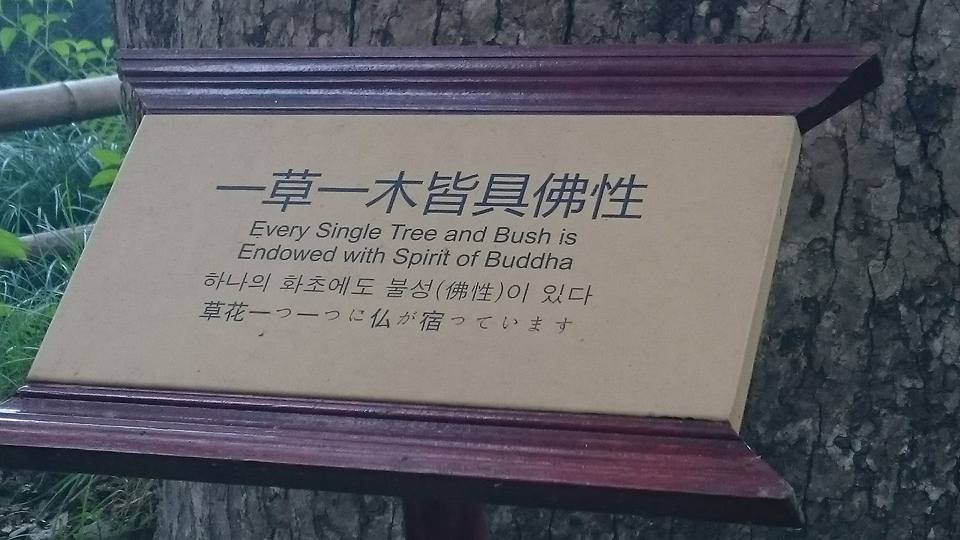 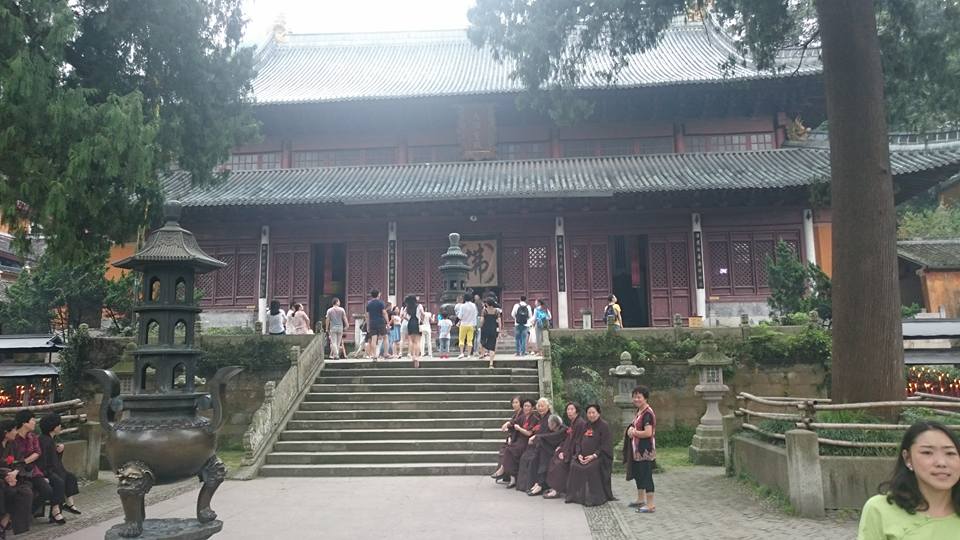 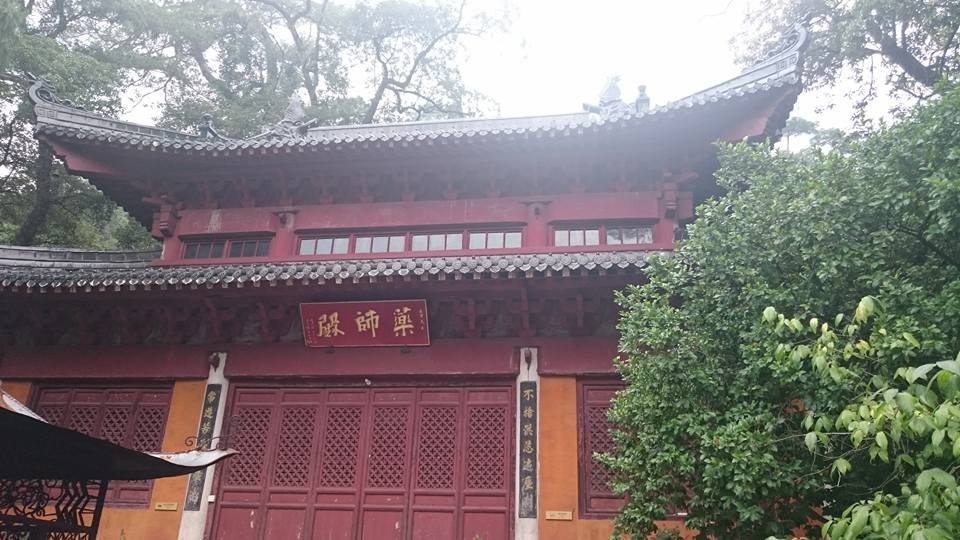 As for the teaching itself, it’s been fine. I’ve been teaching very large classes of roughly 60 children, aged 7-10. I could tell that the kids were very excited to finally have a lesson with me because whenever they saw me around the school they’d either stop and stare at me, wide-eyed with open mouths or they’d point at me and jabber excitedly.

I never felt nervous at all before my first class. I’ll leave it to you to decide whether that attitude was overconfidence or stupidity. I prefer to think it was because I never set myself high standards when writing up a lesson plan. For me, this first lesson was just about getting to know the kids and hopefully getting them to like me! I’m fully expecting this approach to blow up in my face later down the line – I’ve broken every rule and haven’t used every sound piece of advice I’ve been given. As for the kids, I found it was the little details that proved to be most popular with them. I’d brought in images of London on a memory stick for them to look at – the more doctored and unrealistic, the better – and a short video clip that I’d pre-downloaded from YouTube. The kids went nuts for it. I also managed to get them to choose their own English pseudonyms to try and make my job easier in the future. At this point I must confess that I let my own warped sense of humour get the better of me again. If you’re ever teaching in China in the future and you meet a kid called Anti-Christ, I’m really, really sorry.

I’m still yet to join a gym here but because of the state of the local facilities, I’m half looking forward to it, half dreading it. One of the local teachers told me that there was a gym a few metres from my apartment block. Awesome, I thought, until I went in there. You’d think in one of the most humid countries in the world, air-conditioning or at least a fan in the gym would be a pretty essential piece of equipment. Instead I was greeted with the sight of chubby Chinese guys with no tops on, literally dripping with sweat. It was like they’d been in a sauna for 45 minutes; they were soaked in their own fluids from head to foot. I saw a couple of these use a bench and piece of equipment without wiping off the light layer of sweat they left behind. I left quickly before I vomited or passed out due to the heat.

I had a few long-term goals before I came here. I wanted to learn Mandarin, an MMA style martial art, explore China in much more depth and continue expanding my online business via VPN, but there is a lot of work to be done ahead. As I can’t find a teacher and Google isn’t throwing up any results, I can probably rule out the MMA one. Time will tell. It’s only been a week.

Overall my visit to China has been a mixed bag so far, which was to be expected. You don’t make a culture transition like this without a few hiccups, it’s all perfectly natural. The only real problem I have is with the loneliness.

Before I came to China, I thought I’d be teaching at Hangzhou, with a school full of international teachers with whom I shared a language and a huge expat community. Instead I’ve been shipped out to the middle of nowhere by myself. There’s no expats here. I’ve typed in ‘expats in Tiantai’ into a search engine, only for said patronising search engine to ask ‘did you mean expats in Shanghai?’ No, no I bloody didn’t, Google. I’ve tried being as proactive as possible, asking the other teachers and walking the streets alone to find people who share my language and potential friends to no avail.  As I miserably return back to a silent apartment after school every day, I find myself questioning if it was ever meant to be like this? The gap year job I’d pictured in my head was meant to be fun. I’d teach some children during the day and in the evening me and the other expats would go out for a few drinks or just chill out with a couple of games of FIFA. We’d plan trips to places like Japan or Taiwan during the school holidays and greatly expand our repertoire of stamps in our passports and see incredible things. But there’s no-one. It’s just me.

You’ll see some incredible things in China. You’ll see brilliant things and experience an entirely new culture which is one of the things we should all live for. But if Echo in all their incompetence try and ship you out to a school where there are no other foreigners, you have every right to refuse. The contract means nothing. They can’t force you. Get them to confirm that you won’t be alone and the only one of your kind in this strange country and you won’t end up as depressed as I did. Being isolated by language is one of the worst types of loneliness out there.