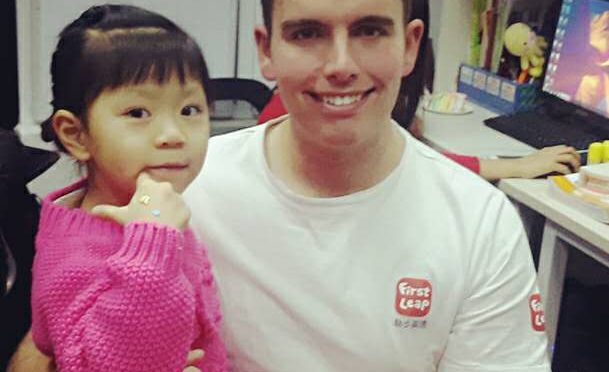 Hi! My name is Lewis. I’m originally from the UK, born and raised in a small city called Bath, located in the South West of England. The intention of this blog is to give you an honest insight of my first couple of months in China. I will describe from my own perspective and I’ll try to be as honest as I can.

I would describe my first week in China as ‘dangerously interesting’. When I say that now, it was a learning curve for me. But when I first came, I had difficulties in terms my contract with my first Chinese company I came as they attempted to change things without my mutual consent. After difficulties with this company I decided to part ways with them. At that point, I seriously was considering going home. I thought I was totally isolated and nobody wanted to help me. But after a few days of uncertainty, a couple of friends and my recruitment agency, Noon Elite, encouraged to stay a little longer and see how I would feel after that. They were open and described their experiences in similar fashion to mine. At first I didn’t believe them, but then I took a step back and thought: “This must happen to a lot of people.” These people didn’t want me to fail; they wanted me to succeed. Noon Elite did an amazing job of arranging another Chinese company for me and I got a job at First Leap. Immediately I noticed a change. Professionalism, organisation and communication from this company were already 110% better than my previous company. I knew that something special would be on the horizon for me.

After I passed the interview, I was given an intensive training course by First Leap with accommodation provided for 14 days free of charge. However, before the training was due to start, I had some time to explore Beijing a little. Already knowing that the Middle Kingdom’s capital was embedded with rich history, I decided to take it upon myself to have a look around. I was not disappointed. Beijing had a fantastic combination of old and new. I got to see Tiananmen Square, Forbidden City, Lama Temple, Wangfujing Market Street, and even on a day off training I managed to find the Great Wall of China. Whilst I was surrounded by these addictive opportunities to go and explore, I attended the training course which I previously stated. I was given an insight as to what I was expected to do as a First Leap teacher. However, I’m a practical sort of person and I think I would learn best when doing the job itself. But the training was useful nonetheless and I studied a lot of important information in regards to the responsibilities as a teacher.

After the training, I realised I did not have a sufficient amount of money to stay in Beijing. This was due to my previous company promising me a free apartment and a stable salary, (both of these were false claims). First Leap however gave me a number of options. One of them included an interest free loan, and one included moving to another city to support schools for a month. I decided to take the latter: it was an opportunity for me to explore more of China and see another part of the country. The city I went to was Shenyang, the largest city in the Liaoning province in North East China. What amused me when I first arrived here was how close it was to North Korea. Well… I like to live life on the edge myself. But I noticed that it was a city on the rise. More money was being invested into the Liaoning Capital and it was visibly showing, from more subway lines opening up soon, to classy and affordable restaurants and bars. Definitely a city on the rise. What I noticed also was a transcendence to my work place in Shenyang also. The people I met there were hard working, which is a quality I always respect. They were also very friendly and supportive towards me which made me very comfortable and relaxed. So much so, that when I realised that there was an opportunity for me to stay here permanently, I decided to follow up with it.

So as you have just read, I’m still here!

Shenyang is a great city. Very cheap in comparison to Beijing and a lot less hassle in terms of getting around. Accommodation is around 50% cheaper than China’s capital city which is a big bonus if you are thinking of saving up money in China. In comparison with a lot of cities in China, the air quality is a lot more stable. The food is also delicious, inexpensive and easily accessible. When visiting the city, you have to try guobaorou, a sweet and sour pork dish which has pork slices in batter in a honey glazed sauce. Yummy! Equally it does have easy connections with Beijing and other cities such as Dalian, Anshan, and even countries such as South Korea and Japan are not too far away to visit. It does have its downsides though. It’s not as lucrative in comparison with Beijing’s flashy lifestyle and the foreign population is not as big in comparison. But of course, as it’s a Tier 2 city, there is less of an impact in terms of the foreign community. The weather is another hit and miss. It’s either hot or cold. I’m not joking. The summer usually reaches around 30 degrees Celsius whereas the winter in January can get around -10 to -15, sometimes lower at night. But like anything, I learned to adapt to it, and it’s not as bad as I thought it was going to me. I’ll let you make up your own mind about it. But as I’m biased, I would recommend you coming here, at least pay a visit!

To sum it up, I have the most interesting experience of my life. Coming here for a new job, learning a new language which is totally different from any traditional European languages we would study in the UK, trying out different foods and experiencing a different culture has been a rollercoaster for me. It does come with the bumps and the bruises of the first week. But coming from that the experience in comparison with now, it showed to me that I am lot stronger inside than I thought I was. Challenging myself like that was the best thing for me and it has given me such a confidence boost ever since. I implore anyone who is thinking of coming to China to take that opportunity. I myself am thinking extending to at least another year, perhaps more.

In regards to my recruitment company, Noon Elite found me and gave me an opportunity of a life time and I found myself working in China. Despite a worrying and uncertain first week, Noon Elite found me a great company to work for in China and I have been happy ever since. The people at Noon Elite were fantastic and helped me a lot in my first week. It was very daunting coming to China and I even considered going back home. However, with their experience, professionalism and caring nature, they were able to provide me with the best opportunity available. I am having a great time in China, working with excellent people and having the life I want. It all began with this excellent company. I would highly recommend them!

That’s from me! If you want to know more about myself experience or ask me any questions about my current feelings in China or China itself, please feel free to add me on Facebook: Lewis Bly, or email me: [email protected]. I’ll look forward to hear from people.

Interested in an adventure in Beijing? Check out our teach English in Beijing guide at nooneliterecruitment.com and apply today :).